It is all about control

Cavity and crown preparation with the Primea Advanced Air. (Image: W&H)
Back to news

In my daily practice, I do a great deal of crown and veneer work, and because I had heard good reports from colleagues about the Primea Advanced Air (W&H), I wondered if there was anything in what they were saying. Beforehand, I had assumed that I had good control with traditional air turbine handpieces; however, that changed when I acquired my Primea Advanced Air. I quickly noticed the difference, and this started to reflect in the time it took to prepare the work.

The overriding difference was in the feeling of control that you have, as the unit allows you to set the speed, and when in use, it maintains it. With my traditional handpieces, I used to lose torque and then speed when cutting with any pressure or trying to remove such things as old crowns and fixed partial prostheses. Until I started using the Primea Advanced Air, I did not realise how laboured my preparation margins had been. The Primea Advanced Air kept the same speed and torque and therefore maintained cutting power and resulted in more consistently accurate margins that did not need constant touching up. This was a clear improvement, as before I had almost been stalling within the preparation or having to shave layers off the tooth rather than just cutting once at the desired depth. 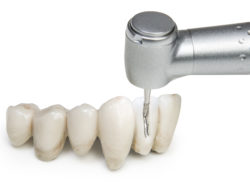 Cutting of a metal–ceramic restoration with the Primea Advanced Air. (Image: W&H)

Furthermore, burs are designed to work optimally at a particular speed, which should be displayed as the operating speed on the packaging. On researching the bur speed effect, I came across an interesting article by Funkenbusch et al., who described the cutting efficiency of burs when used with different types of rotary cutting instruments. They reported that there were consistent, statistically significant effects in using the electric units versus air turbines.1 I can agree with these statements now, having experienced the superb performance of the Primea Advanced Air. I was able to retain a finer control of speed and, by this means, keep the bur working optimally. For this reason, my preparation was suddenly easier—and quicker. Without this control, you are preparing blind.

It was a pleasant surprise to find just how light the handpiece felt. This is a feature that electric handpieces cannot exhibit and this is regarded by some clinicians as a disadvantage. Their opinion is supported by Campbell.2 In my experience, this light weight enhanced the tactility of the handpiece and it felt like I had finer control and better comfort in use.

The Primea Advanced Air has, without doubt, made my clinical experiences and treatments easier. After about six months, I started to notice further effects in that my tooth preparation times had come down by around 3–5 minutes per unit. The biggest difference, however, was in the time it took to remove old crowns. Suddenly, with the gain in control of speed and torque in combination with the right bur, crown removal became almost easy. These 3–5 minutes per tooth preparation do not seem a huge amount of time, but with more complex treatments and probably multiple preparation sites, the time saved starts to add up. Such efficiency of cutting a variety of materials is mostly reported for electric handpieces.3 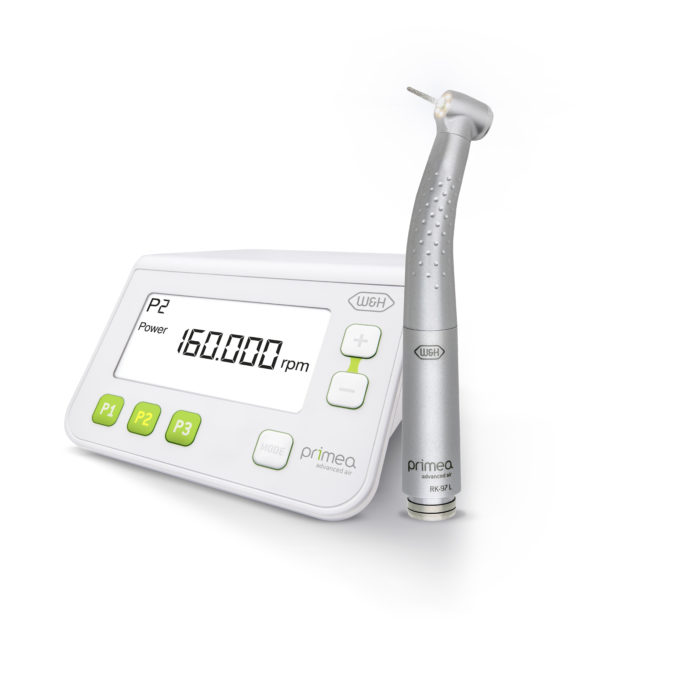 A sensor in the head of the turbine constantly measures the actual rotation speed of the bur. When the speed threatens to slow, the control module adjusts the air supply immediately. (Image: W&H)

An unexpected outcome of the Primea Advanced Air was that my patients started to comment that the drilling was quieter and some people reported less vibration. I had not consciously thought about the impact of this, but as we see many anxious patients who are sensitive to drilling sounds, this made a real difference. Hence, we tell all our patients about the quieter drills—what a unique selling point.

In conclusion, the greatest difference with the Primea Advanced Air is, without doubt, the improved control, as it allows me to achieve better preparation more quickly with less patient chair time and better patient feedback. This trial has definitely paid off, and I am glad I took the time to investigate the efficiencies of an air drive with an electronic control system. I suggest you do the same; you will be surprised at the results.

LONDON, UK: In last month’s UK general election, the Conservative Party recorded a resounding victory, securing 365 seats to achieve an outright majority in Parliament. The British Dental Association (BDA) chair Dr Mick Armstrong has wasted no time in contacting the government, penning an open letter to Secretary of State for Health and Social Care Matt Hancock on the topic of funding for NHS dentistry.

LONDON, UK: In a further development in the fight against sugary drinks, the Oral Health Foundation has called for people in Britain to change their habits and choose healthier alternatives. The call to action comes after new research has shown that increasing sugary drink consumption by 100 ml a day over four years will increase the risk of Type 2 diabetes by almost 16%.

BIRMINGHAM, UK: Miglionico, the first manufacturer of dental units in southern Italy, is exhibiting NICE ONE L, the latest version of its orthodontic dental unit, at the 2019 BDIA Dental Showcase. The unit comes with an ambidextrous delivery arm that can rotate 180° to the left or right and a multifunction display with a glass surface for easy cleaning.