Home/Articles
In order to educate the dental community about the challenges that menopausal women face in the workplace, the British Association of Dental Nurses launched a menopause policy at the beginning of this year. (Image: Visual Generation/Shutterstock)

Even though it effects roughly half of the population, the menopause is still a taboo subject in our society. According to an article in the British Dental Journal, menopausal women are the fastest-growing workforce demographic. Around eight in ten menopausal women are working, three out of four experience symptoms and one in four has serious symptoms. In severe cases, menopausal symptoms can lead to employees leaving their jobs. In order to educate the dental community about the challenges that menopausal women face in the workplace and the ways in which employers can support them, the British Association of Dental Nurses (BADN) launched a menopause policy at the BDIA Dental Showcase in London in March. Dental Tribune International spoke with Jacqui Elsden, president of the BADN, about her personal experience of going through the menopause while working as a dental nurse and about how dental practices can help their employees to feel more comfortable during this period of their lives in order to keep their current staff or recruit new staff. 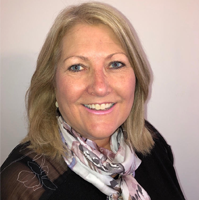 Jacqui Elsden qualified at the then King’s College Hospital Dental School in 1983 as a dental nurse and has been the president of the BADN since 2019. (Image: BADN)

Ms Elsden, thank you and the BADN for raising awareness of such an important topic. Even though thorough information material about the menopause in the workplace was probably long overdue, what made you decide to react and launch a policy at this specific point in time?
That’s a really good point, and the answer is actually the COVID-19 pandemic. During that period, where we initially were locked in, some of us still had to work in practices in the UK in dental emergency hubs. And at that time, there was less awareness of the effect of aerosols. So, many dental care professionals and dentists were clad in plastic from head to toe. Coupled with that, the summer of 2020 was really hot. Having a hot flush, covered in plastic, and unable to leave the room was really tough. The temperature in the room couldn’t be controlled, and early on, we had the windows open and didn’t know whether we could use fans. During that time, we received many calls at the BADN head office from nurses who asked about what they could do because they were suffering great discomfort from having to wear personal protective equipment (PPE) in combination with the heat and were afraid of passing out.

Many people announced that they were leaving the profession. Dental nurses in particular had had enough. They are paid poorly in primary dental care in the UK, and on top of that, they had to put up with the additional stress of wearing PPE. Considering that dental nurses are predominantly female, we decided to raise awareness about the menopause and its impact on dental nurses in order to help practices understand how we might retain more of our workforce in practice.

Menopausal symptoms surely vary from person to person, but what are some of the typical symptoms that menopausal women experience? And how do these symptoms affect them in relation to working in a dental office?
I’m going through the menopause myself, so I can offer insight from a personal point of view. Symptoms do vary, and some colleagues of mine, who are in the same age group and are going through the menopause, have not experienced a hot flush or a sleepless night once. However, for me, it has not been an easy ride.

The flushes are a problem not only because you feel very hot but also because you sweat a great deal. As a result, you are afraid of body odour while working in close contact with the patient and other staff members, and this makes it necessary for you to apply toiletries often or change your working clothes. I’ve even fainted once. I was travelling on a train, commuting to work, and I needed to get off because it was so hot. And as I got off the train, I passed out on the platform.

Another really important issue is insomnia. I find myself wide awake in the middle of the night, and I’m lucky if I can string two hours of sleep together. With a sleepless night comes fatigue in the day and the inability to concentrate, which makes you rather irritable at work. Brain fog is another symptom. Sometimes I find myself in the middle of a sentence, and I just forget what I wanted to say. This brain fog can really make you think you are going mad.

Those are some of the physical symptoms but there are also psychological symptoms. I haven’t suffered from depression, which is known to be a possible problem; however, I do sometimes feel a bit low and fed up with it. Some people even suffer panic attacks.

What measures can practices take to make working life easier for menopausal staff?
There are quite a few things that I can think of. We put together an overview in our advice sheet, and we also created a policy.

I suppose the most important thing would be to allow open communication within the practice. Employers should have conversations with employees who often phone in or who do not seem to feel comfortable at the workplace in order to find out the reason. And employees should feel able to actually bring up the topic with their employer. We hope that our advice sheet and the specimen policy will help encourage these conversations.

Regarding the style of the uniform, there are different aspects to consider. To make it more comfortable for people who experience hot flushes, you may choose lightweight cotton instead of heavyweight cotton. Also, some employees might not want to wear trousers, as they can be restrictive, so give them different options. The colour of the uniform is another crucial factor. Because, during perimenopause, it can happen that you miss one or more periods, and then you just flood and have a period for about two weeks. When this happens, working in a dental practice where your uniform is white is the last place you want to be.

Other measures include offering staff members who suffer from insomnia the option of coming in later or working the afternoon shifts, if the practice schedule allows this. Also, air conditioning or fans can be really helpful in order to control the room temperature.

I think it is really important for employers to understand what is being experienced. If an employee feels that she is listened to and understood it makes a great difference, and she will do everything she can to perform her work in the best possible way. Those of us who are going through the menopause don’t want to be lying in bed during the day to catch up on our sleep, we want to act in a normal way.

If we all decide that this is enough and leave, then there’s an entire cohort of dental nurses with a considerable amount of knowledge and experience that will be lost

I am sure menopause-friendly measures benefit not only the staff but also the practice. Could you highlight some of the advantages for those dental practices which are willing to adapt? As you said, most dental nurses are female, and if the majority decide to stop working, this could turn into a real problem for the profession?
Yes, it could, that’s exactly right. I think in terms of recruitment, if you demonstrate that you do have a menopause policy in place, it might make the difference of having ten applicants for a post compared with two applicants. I’m 57 now, and I’m still struggling with the menopause. I started to work as a dental nurse when I was 17, so I have 40 years of experience. I’m not saying that I have all the knowledge in the world about dentistry and dental nursing, but I have a fair amount, and so do my colleagues. If we all decide that this is enough and leave, then there’s an entire cohort of dental nurses with a considerable amount of knowledge and experience that will be lost, when there is, perhaps, a simple solution to avoid this happening.

In a BADN press release, you stated that legal cases related to the menopause have doubled in recent years. What is the current legal situation? Are there any laws in place that regulate working conditions for menopausal employees?
We think that, under the Equality Act 2010, the menopause is covered under the three protected characteristics of age, sex and disability. Although the menopause isn’t a disability in itself, it can be considered as such if it has a sustained effect on a woman’s ability to complete daily activities for more than 12 months.

If a person is suffering from menopausal symptoms, we believe that the employer should make reasonable adjustments to ensure that the employee is able to work in a manner that’s comfortable. However, there are no specific measures on the menopause yet because many policies and laws are too vague.

Nevertheless, I think employers would be keen to avoid any sort of legal case. And if it’s something as simple as buying a fan or being flexible about working hours, that’s quite an easy fix, compared with facing claims in court.

How has the policy been received so far?
We have had a good response, and some of our members took it back to their own practices to use as a conversation tool in meetings.

My colleague Anita Stanforth, who is the BADN’s education representative, is going to speak about the menopause in the workplace at the London Dentistry Show at ExCel in October. We will also have a booth at the show (#A48). Hopefully, this will raise awareness further.

Is the menopause regarded as a taboo subject in areas other than the dental profession?
It really is, it’s happening all over. Just looking at my own family, my mother belonged to a generation that never spoke about it. It was all hushed in whispers, so she never spoke about it to me either. It sounds ridiculous but, when I got the first symptoms, I didn’t even know what was going on.

In my parents’ generation, usually the mothers were housewives and the fathers went to work. However, I wanted to work because I didn’t want to be at home. And those generations coming on behind me sometimes do not have a choice—they need to work. Thus, the whole approach to work and careers for women has changed in quite a short space of time, really—in a generation.

I feel it’s partly my responsibility to educate our younger generation. Of course, the younger generation is more curious and has the internet and easily accessible information. However, in spite of this, I do feel that the menopause is still a neglected topic.

More information on the BADN and its endeavours can be found at www.badn.org.

Related Articles
News Mon. 14 December 2020
“It was my intention to break this taboo”—researchers develop ergonomic bra for female dentists

DÜSSELDORF, Germany/HONG KONG: Since the number of female dentists has steadily increased over the past decades, their needs in the field of dental ...

News Thu. 29 July 2021
Interview: “This could be the beginning of a new way we do local dentistry”

Fiona Perry, from Perthshire in Scotland, started her journey in dentistry as a dental nurse in the early 1980s, and a couple of years later, she qualified ...

Female leaders are still under-represented in many fields, and dentistry is no exception. This situation inspired Dental Tribune International (DTI) to ...

NEW YORK, US: The Oral Health Workforce Research Center (OHWRC) is responsible for providing research on the oral health workforce in the US and assisting ...